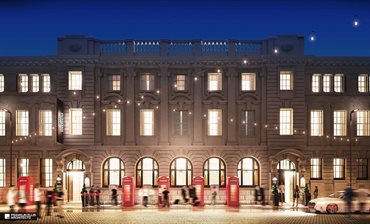 Details have been released of plans for a hotel in two iconic Blackpool buildings which will secure their future and create a world first for a global brand.

The developer behind the scheme – Cheshire-based Ashall Projects – has submitted a planning application to create a high-quality 148-bedroom Indigo Hotel and Indigo Suites in the former Grade Listed Post Office and Sorting Office. II located in the heart of the city.

He believes the hotel will play a key role in attracting tourists and business people to the city while bringing two of the city’s finest buildings from the early 20th century back into use and ensuring their survival.

Ashall Projects works in partnership with Blackpool Council and IHG, one of the world’s leading hotel companies. Each Hotel Indigo is different and is inspired by the history of its region, its history, its culture and its main monuments. It starts at the design stage, informs the selection of décor and furnishings, and even influences the choice of local ingredients on the restaurant menu.

The site is a short walk from the railway station, the Winter Gardens and the new £28 million conference centre, Blackpool Tower and the North Pier. It is also close to the new tram extension linking Blackpool North to the Promenade.

Many original features of the post office, which opened in 1910, will be retained. They include the facade on Abingdon Street which features a number of stained glass windows which overlook a distinctive row of eight red telephone boxes. Inside, the marble flooring, cornices and other attractive architectural features will be restored.

The Post Office and the Sorting Center are separated by a large interior courtyard, which will also be transformed.

“It will be a Hotel Indigo with a difference. It will cater to both tourists and short-stay business travelers and will also offer extended-stay suites with additional amenities, such as kitchenettes, to provide space and amenities for guests wishing to stay longer. long time.

“There are nearly 150 Indigo hotels around the world, but this will be the first time that Indigo will offer extended stay rooms in addition to regular Indigo rooms. We believe this will allow us to offer a wide range of hosting options that will meet a variety of customer requirements.

The hotel will employ around 70 people and 215 people will work on the construction.

Ashall Projects has considerable experience in developing and opening hotels, including the Aloft in Liverpool. The former Royal Insurance building, described by a national newspaper as a ‘dilapidated gem’, underwent a multi-million pound restoration and won the BCIA building project of the year award in the year of its completion.

“There are many similarities between our work at Liverpool and what we plan to do at Blackpool.

“The building there had been derelict for 20 years and was in such poor condition that it had been listed on the national register of buildings at risk. It’s hard to believe when you look at it now.

“There is a lot of work to do on this project, but we have the resources, the knowledge and the commitment. Instead of being neglected and in danger of becoming an eyesore, these buildings will enhance the town center and provide the world’s first Indigo Hotel of its kind which will help attract all manner of visitors to Blackpool.

The hotel is designed by Franklin Ellis Architects who, like Ashall Projects, have an impressive track record of delivering hotel projects, including the Indigo Hotel in Chester city center which was completed in 2019.

Matthew Branton, partner at Franklin Ellis Architects, said the project would ‘further help the wider regeneration of the locality and its place at the heart of Blackpool town center conservation area’.

It would provide “a city center oasis feel for visitors and guests, whilst enhancing Blackpool’s premium accommodation offering, alongside providing several options for events and meetings to improve the city’s business and conference offer”.

The project is one of three development projects to be featured in Blackpool’s upgrade fund bid which was submitted to the central government on July 02. Other projects include an active travel/downtown access program and redevelopment and the creation of a new convention space with retail, in the Olympia area of ​​the iconic Level Winter Gardens 2* from resort. The three programs are interdependent and “ready for delivery” to begin delivery before the end of March 2022, and meet the criteria and the three key themes of the first round tender process: transport, regeneration and investment in the city ​​center and investment in culture.

“Blackpool Council fully supports plans to bring this key historic property back to life. This upmarket hotel development will attract extended stay business and leisure travelers to central Blackpool all year round for the benefit of local businesses. We look forward to working with Ashall Projects on this exciting new project. »